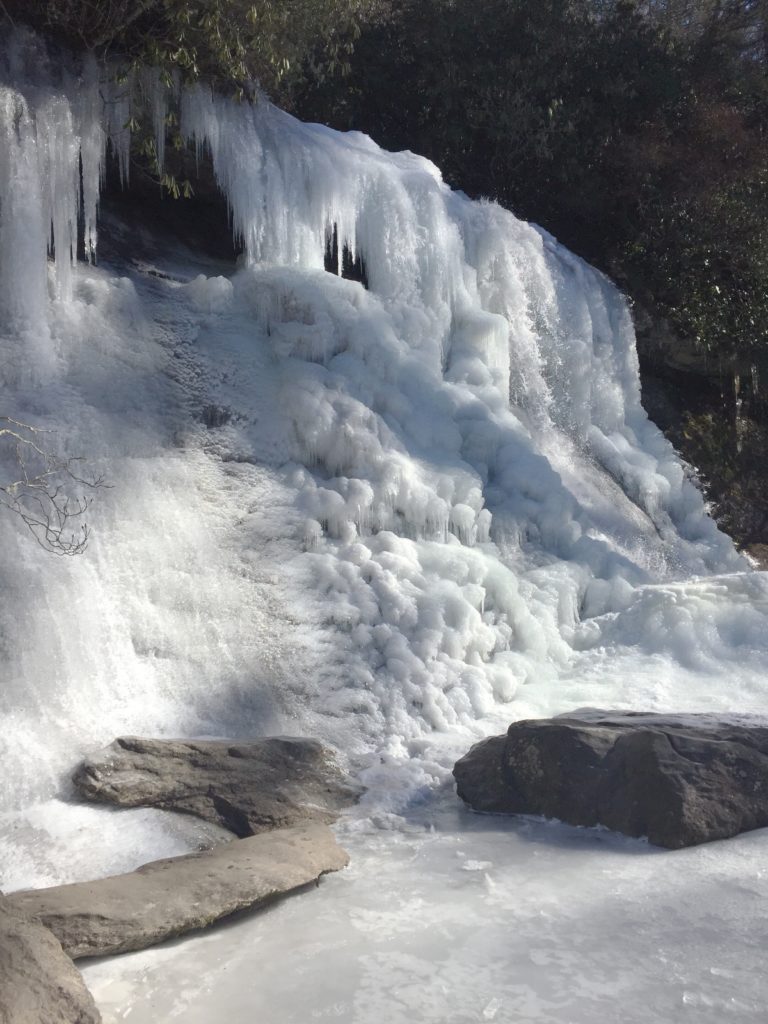 While the NC mountains are colder than most of the south, the weather is still pretty mild in comparison with the rest of the country. So when temps drop to the single digits, we hunker down, let our faucets drip, and dream of summer.

But there is one perk to the extreme cold: frozen waterfalls. After a week of subfreezing temperatures, Mike and I headed out to check out the waterfalls–at least the ones that aren’t too far from the car. It’s only 30 degrees out, and I am a wimp when it comes to the cold. Each waterfall has a link to google map directions from the each waterfall to the next starting and ending at the cabins.

Silver Run Falls is about 1/10th of a mile off Hwy 107 S. I walked as quick as I could to the second viewing spot, closest to the waterfall. The pond at the base of the falls is thickly frozen, but don’t walk on it. The falls themselves are a wild formation of ice pillars and icicles, with a thin froth of water still fighting to cascade down the mountain. It’s simply gorgeous.

Next, we head back through Cashiers to Hwy 64 toward Highlands. If it was a bit warmer, I would stop and hike Whiteside Mountain. The hike wraps around the rocky cliffs of the ancient pluton, and the north side of that mountain had great icicle formations.

On the other side of Highlands, toward Franklin, is the Cullasaja Gorge. This steep, winding, and narrow route features four waterfalls visible by barely getting out of your car.

First stop is Bridal Veil Falls. Ok, maybe not stop. There were probably ten or more car already pulled over to view the spectacle. So we just slowed down, and I took the photo from the window of the car. Bonus points for not actually having to get out of the car. You used to be able to drive behind Bridal Veil Falls, but rocks keep falling from the concave walls. Not ideal when you are taking a picture of your pretty sports car.

Just down the road is Dry Falls. Unfortunately the path down to the falls is closed due to ice. So we viewed the waterfall from the upper viewing area. Still amazing even from a distance, Dry Falls is thus named because you can walk all the way behind the falls and out the other side without getting (very) wet. But the powerful waterfall sprays a lot of mist and coats the surrounding gorge with ice. A few years back, we were able to get a great shot up close of the ice cave formed by the waterfall.

A little ways further is the elegantly named Bust-Your-Butt Falls. In the summer it is a popular swimming hole. While it shorter drop means less than stunning ice formations, it is a good place to see how the ice forms around the boulders and slower back eddies of the river. The fastest moving water still carves a winding path through the thick ice.

Cullasaja Falls is visible from a pull out, but it didn’t photograph very well. So you’ll just have to go see it yourself. But here are some icicles lining the side of the road. In spots, they have fallen from the steep rock walls onto to the road which makes for some slippery spots.

The gorge opens up a few miles from Franklin. Since we didn’t need to go into Franklin for any shopping or restaurants, we turned right up Walnut Creek Rd. This road follows a steep valley up to a mountain Pass back into Jackson County. There the road is renamed Pine Creek. Pine Creek Rd leads back into Glenville and Hwy 107 by crossing the dam at the north end of the lake.